A Gone-Fish tournament, an addition with a lesson learned, a blind, demolition and finally, a serial biter…

I normally stick to one topic per post.  Today, I have a few topics to cover.  Feel free to jump in at anytime.  I’m starting to get a complex about my low or even non-existent readership.  :0)  Is anyone out there??

Gone-Fish: Willis & I attended an annual youth fishing tournament on Sat.  Last year he walked away with a trophy for largest fish caught.  He has always been a patient and dedicated fisherboy.  For example, the Sunday before we had Pickle & Willis’ ‘friend’ birthday party at the same pond.  Some of the kids choose to fish.  He was constantly whispering “SHSHSHSH, the fish won’t bite because you are all too loud.”  Not bad for a 4-year-old huh?  They never did catch anything.  My hubby saw this as a precursor for the tournament & decided to stay at home to build a mobile deer blind.  *Stay tuned for an update on the blind.* We probably should have followed his advice because we came home empty-handed as far as fish is concerned.  Our Fire Department sponsors the event and every kids leaves with some type of gift.  Even though there weren’t any fish, it was some good bonding time for myself & Mr. Willis who suffers from a severe case of Middlechild Syndrome. 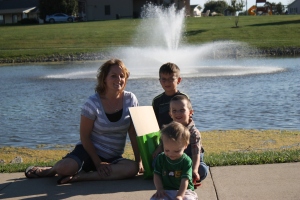 The tournament took place at the this pond.

An Addition: A week & a half ago we found ourselves unable to keep up with egg demand.  Without a product, you can’t make the sale.  So a decision was made to purchase 5 new chickens which should begin laying in 2-4 wks.  This brought our hen total up to 20…For two days.

A day after the chickens arrived I went down early for evening chores. I wanted to see how everyone was adjusting.  My main concern was how the pecking order was coming along…especially since the chickens arrived de-pecked.  Once I finally opened the door to the ‘coop’ side of the shed I saw one of the New Hampshires (who I’m beginning to think are really Opingtons but that’s another story) hanging upside down from the roost.  With our goal of re-using & becoming innovative with what we already have, we’ve always used a piece of fencing for the roast.  My first thought was that she was dead.  I ran to her rescue to find her leg weaved in between the metal wires.  Once I had her up she wasn’t able to stand.  I took her up to the house & got her some water.  Long story short….I didn’t check her over well enough & overlooked several large scratches around her bottom area.  She stayed in the garage for the night & then I moved her outside.  Eventually she was limping around & looking great.  By the afternoon I noticed the flies & gnats which wouldn’t leave her alone.  That’s when I checked her over completely.  I found maggots in the lesions.  Several times I attempted to clean all of them out, sanitize her & cover her with triple antibiotic.  To no avail, I was unable to save her.  Not having a sick or injured chicken before I did the best I could.  I’ve assisted in a prolapse surgery on a cow before, I’ve castrated piglets…but when it comes to chickens I’m pretty green.  For two days we had 20 chickens and now we are down to 19.  Lesson learned…we are re-building the roost.

The blind: My genius hubby is always thinking & creating.  His newest creative idea is to build a mobile deer blind that can be pulled with the 4 wheeler out to the middle of one of our hunting fields.  I can only post one picture…otherwise I’d have to hunt you down & make sure you don’t try & replicate his TM idea.  Just kidding…maybe.

The Demolition: It’s been a while since we made any major changes to the Magic FarmHouse.  That changed yesterday.  One of the best advantages to my hubby’s job is ‘dumpster diving.’  Well, not really.  He works on commercial projects which in my opinion are many times unnecessary renovations – but I’m thankful they are renovating to get him busy working!  Last week the job site where he was working was trashing some perfectly nice cabinets and plywood.  He took all of it before they could hit the dumpster.  The cabinets have been a lifesaver in our new smaller storage room/office.  And, the plywood has allowed us to begin gutting & refinishing our downstairs  bedroom (old storage room/office)…

The beginning of our newest demolition!!

My VERY favorite part about gutting a room is finding the magical treasures.  So far, there’s one wall left and we haven’t found anything!  Bummer!

The Seriel Biter:  Finally, my precious little boy who was calm & who loves to cuddle is missing.  Instead I have a little maniac who’s running around trying to bite everyone!  Where did I go wrong??  He is seriously chasing Willis around the rooms with his mouth open wide trying to bite.  This is the first time we’ve encountered this problem…any suggestions??  Oh, wait, I forgot, no one reads my blog!