**Warning: this post contains information pertaining to hunting which we depend on for food and survival.  If this is offensive then please check out the ‘In the Farmhouse’ page and category.  I respect your opinion and I ask that you respect mine.  I can not explain our desire to hunt any better than a fellow blogger, The Country Man’s Wife, so I direct you to her site.  Specifically, her response to the first comment following the post “Tree Stand Celebration.” (she also has a cute post today about her babies)**

On to my post….Got Meat?

Well, we almost did not have any meat until last night.  We’ve been running low on our deer & beef and only remaining ground meat are  specialties like breakfast sausage.  Great for breakfast, not my favorite in spaghetti.  Store bought meat contains too many artificial ingredients and ‘what ifs’ in my mind.  My favorite butcher is an inconvenient 35 miles away.  So I’d really prefer that someone harvest a deer.

Bow season/harvest in Illinois begins Oct. 1st.  Since that day we haven’t seen one deer on our property.  This is the longest dry spell in our family’s history.  Now there are several theories floating around but just when you think you have the species figured out they do something else.   Needless to say my hubby had been in the dumps as of late.  So I kicked him out to the great prairie.  Ok, he called our neighboring farmer and asked if he could hunt out on his property.  Just before the sun set he saw two deer within shooting range.  He shot at one that was only 15 yards away and missed.  His second shot at about 40 yards was a hit.  Hmmm?

Through the dark, wet night with thunder rumbling from above and lightening streaking across the sky, out he & my brother-in-law went to locate his harvest.  The blood trail was strong at first and then trailed off, probably due to oncoming rain.  Finally, they found the buck.

Certainly not a trophy buck, but we don’t hunt for trophies, we hunt for survival.

So now I can answer my question, “Got meat?”  Yes we do!!  My next post is going to be another recipe.  One which makes a tantalizing meal that easily double as an crowd pleasing appetizer.  Following that post, a review of another fellow blogger who has inspired me with a challenge.

Before embarking on a new activity, as a parent I always ask myself, “What is my purpose or goal for enlisting our child in the activity?”  Last fall Cub Scouting became an option for Pickle.  And we asked the question.  What do we want Pickle to gain from Cub Scouting?  Of course, we want all of our boys to be successful, caring individuals who have self-worth.  Over and above this we want them to have a trait neither my hubby or I feel we had…Confidence.

As leaders, two of us took Monday, Wednesday and Thursday.   Others filled in during Tues. and Fri. as they could. There were 21 boys. Ten from our Pack and 11 from another who couldn’t have cared less who we were or that they should even attempt to respect us.

***VERY IMPORTANT TIP & NOTE TO SELF: Avoid walking on Mon. if at all possible.***

I’m a little dizzy from Mon. & reeling from all of the Mack trucks that ran over 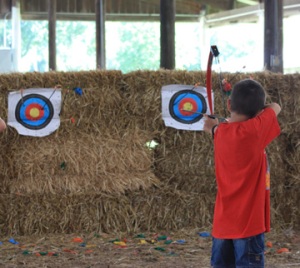 me.   (SIDENOTE:  Two years ago I thought I’d try substitute teaching.  Due to a breast-feeding schedule – God’s way of saving me some embarrassment – I was never able to go in but my husband always said they’d eat me alive if I did.)  As of last Monday, he was officially 100% correct!

If I’m still dizzy now, 8 days later, imagine how I felt last Tue.  Well, let’s not.   I spoke with the mom who went on Tues. and learned that the boys all got into trouble during archery and air gun rifle.  This pushed me over the edge and somehow on Wed. morning I emerged as Hilter.  We had a fantastic time in the sports station as each Scout would go through an obstacle course.  Then it was archery time.  Prior to leaving the Sports area I attempted to line the boys up single file.  This 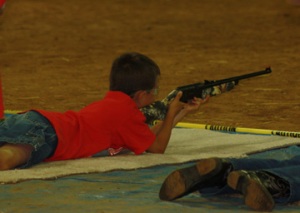 Here is is shooting in the airgun range. He had all week to shoot a total of 35 pts. & receive his badge. On the first day, he shot 47 pts.

bombed like a flying bird pooping through the air.  It also charged my temper.  As I arrived at the archery area I went to the head instructor and told him we are implementing a ‘zero tolerance rule,’ – listen, be quiet and sit patiently or you’ll sit out for the rest of the day.  The younger boys ‘got it,’ except for the ADA child.  The older boys looked at me like ‘whatever lady! We are in charge here!’  Even so, they did well through archery.  Then came airgun – the rule was re-explained but this time they tested it & two boys ended up sitting out.

There was an indifference…do we like her or do we respect her??  As the day went on I tried to bond with a couple of the boys signing songs like “I don’t know what you’ve been told, but Girl Scout cookies taste like mold!” and helping them bait their hooks at fishing.  On Thurs., I worked to build more rapport.  They became more attentive to the rules which led to more fun.  At the end of the day, as we were marching in the single file row I failed to create on Mon., I mentioned to a couple of the boys that I wouldn’t be there on Fri…to my surprise they were disappointed.  On Fri., watergun day, I went to pick Pickle up.  One of the older boys was trying to shoot a boy who was standing in front of me.  The boy in front moved and I became the hit target.  The look on his face was something I’ve dreamed of seeing on my own boys’ face.  His face went from smiling to scared and he quickly apologized, stumbling over his own words.  I said it was alright and we hi-fived.  It was a new-found confidence that Cub Scouting gave an unintended person…ME!