Two out of Three Kids Agree!!

I’m so proud right now!!  For years and years and years I’ve tried growing green beans and peas.   Every year they would undoubtedly fail but try, try again I did!  This year my green beans took off & I have a crop!  At first I thought I’d only get a few and that was enough of a victory for me.  Then they kept on budding and growing.  We picked the first time about two weeks ago and I had enough for one meal.  After eating canned, store bought green beans these were honey to our taste buds.  Even two out of three kids agreed, mom’s beans were much better than those ugly, gross green things she shoves down our throats! Willis has been a picky eater since he was two…the doctor said it’d be a phase he’d grow out of…I guess I forgot to ask when!

On Friday, little Pudder and I headed out to the 93 degree/113 heat index weather and picked again – before you judge, at the time I had no idea it was really that hot.  I’m starting to wonder if my iron counts are depleting again or maybe the Magic FarmHouse has given me a delightful power to endure heat.   Pudder didn’t seem to mind and wasn’t hurt in anyway and the little trip to the garden resulted in some cherished memories.

It was a rewarding experience as we began to pick.  The moments quickly turned entertaining as Pudder, asserted himself and decided he would be mama’s helper.  I was picking beans from one side of the row and he started picking leaves.  To change position and reach beans on each side, I straddled the row.  All of a sudden I was stopped in my path as he ran in front of me, lifted his leg and attempted to walk with the row between his legs.  The plants are about half his height so this was amusing to say the least.

Noticing the process wasn’t very effective I began picking the beans and making him a pile next to the row – my subtle way of giving him something to do.  To my surprise he left his position which looked similar to a cowboy riding an over-sized bull and began picking up the beans, taking them to the bucket and dumping them in.  Score!!

These are fun times!  We finished the row and took our loot inside.  I’m estimating a total of 3 quarts give or take a few.  I LOVE to eat raw green beans…I know I’m a weirdo!  It’s times like this that I should be called a Backwards Mama! LOL!

It’s sad to see how fast the summer is coming to an end.  Even so, I love this time of year.  It’s a time when you can harvest the seeds you’ve sowed and worked so hard to nurture throughout the spring and summer.  Or, fall, I just planted my pumpkins, zucchini and cucumbers about two weeks ago but that’s another story for another day.

Now, where did my salsa recipe go??  The tomatoes are going to be next….

This entry was posted on August 15, 2010 by themagicfarmhouse. It was filed under Being a Country Mom, CrazyKids, Garden and was tagged with anemia, cucumbers, garden, gardening, green beans, growing, kids, photography, pumpkins, toddlers, tomatoes, zucchini. 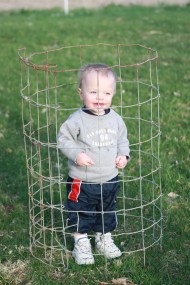